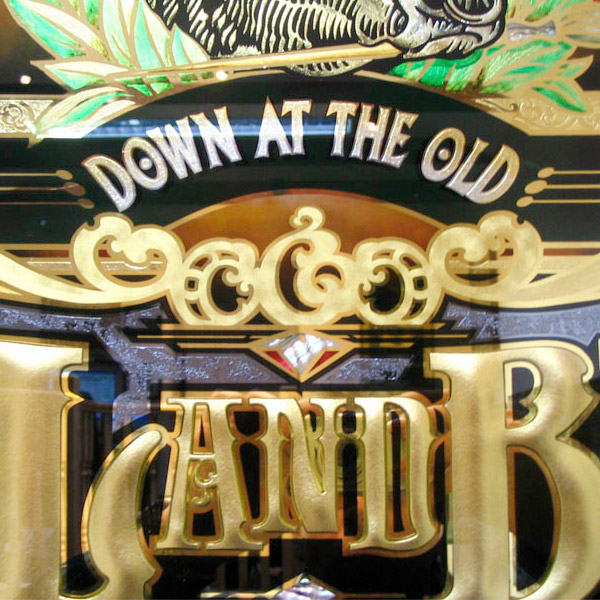 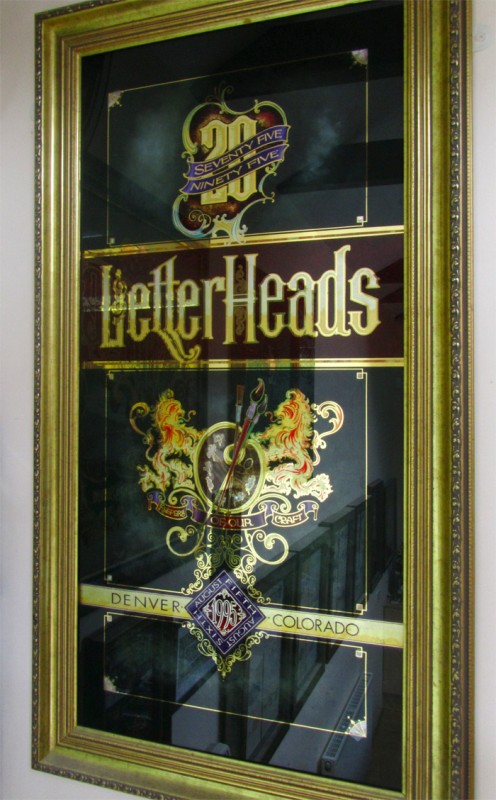 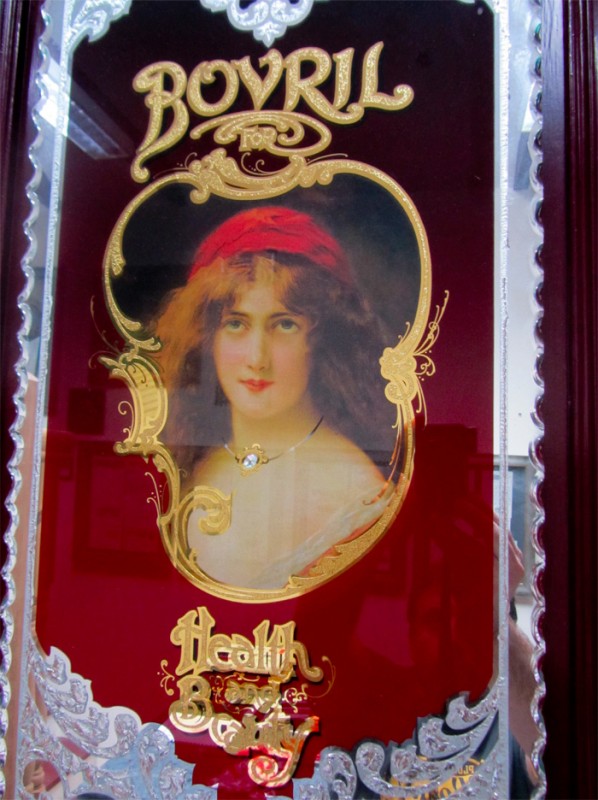 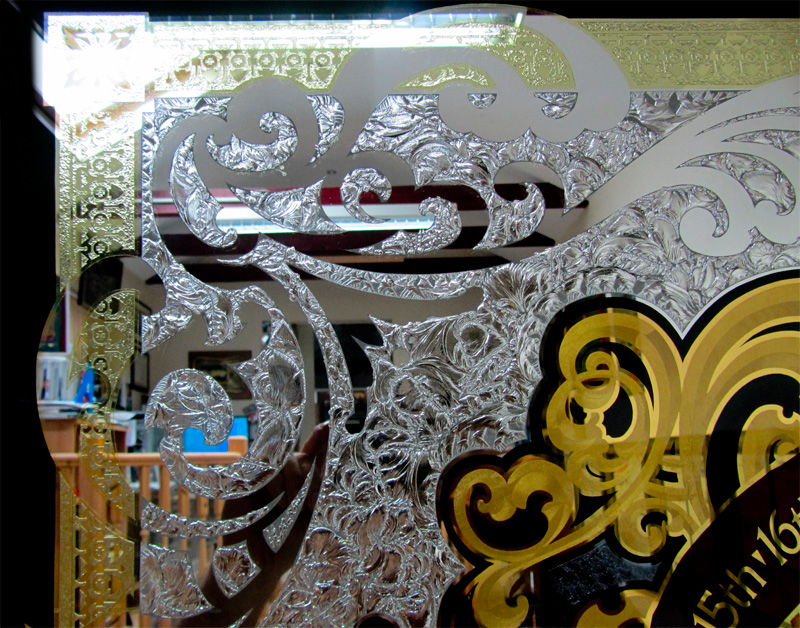 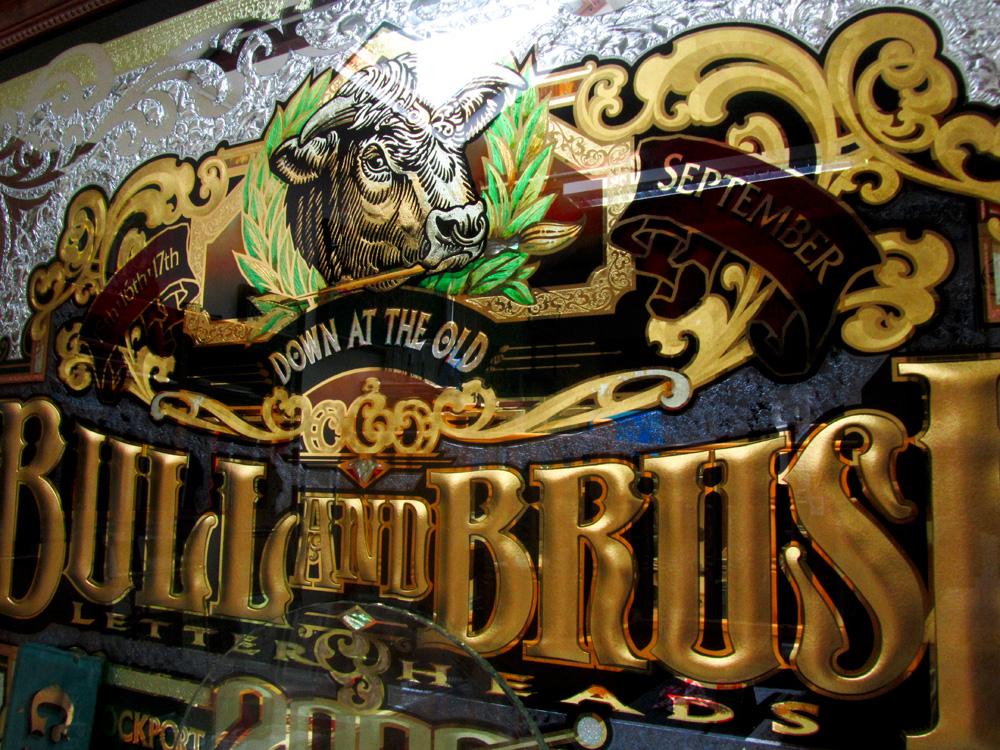 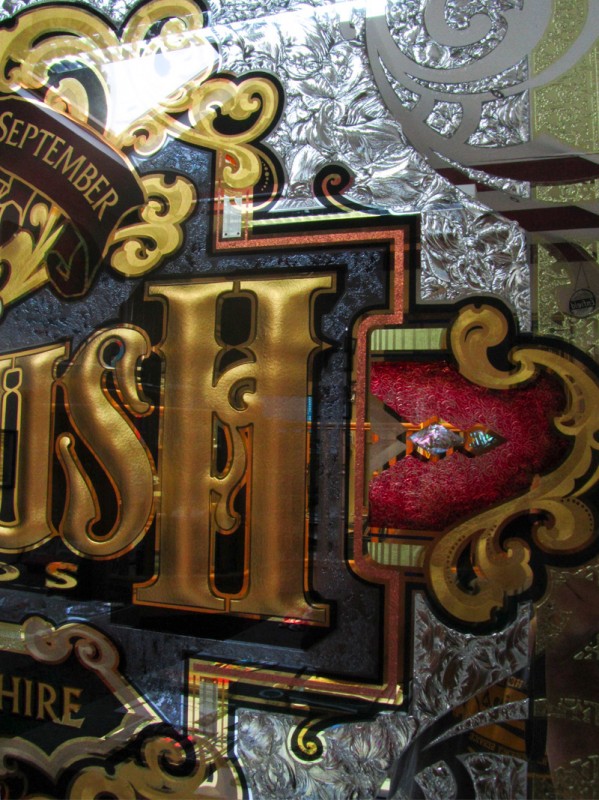 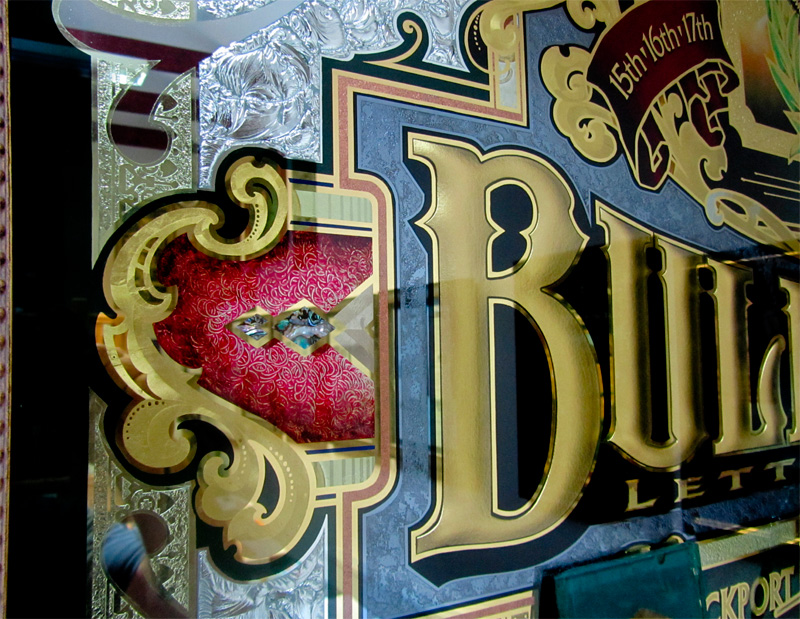 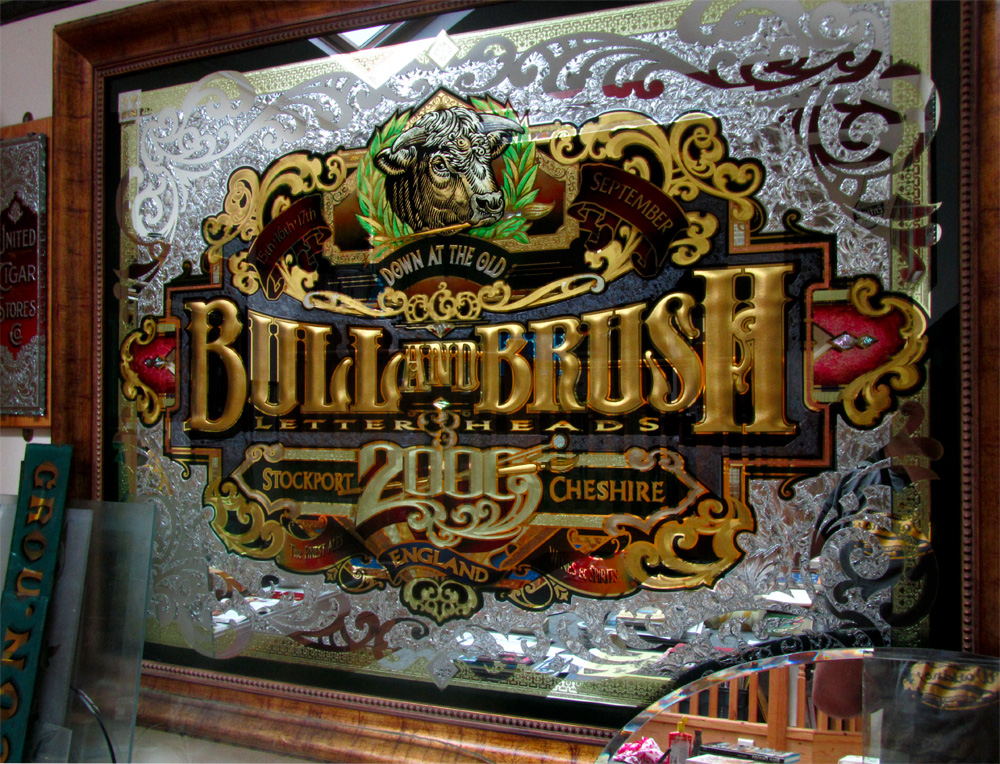 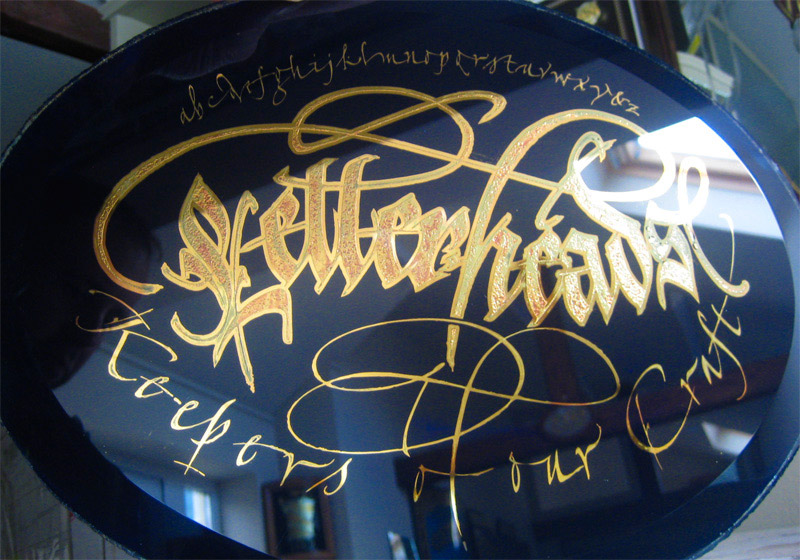 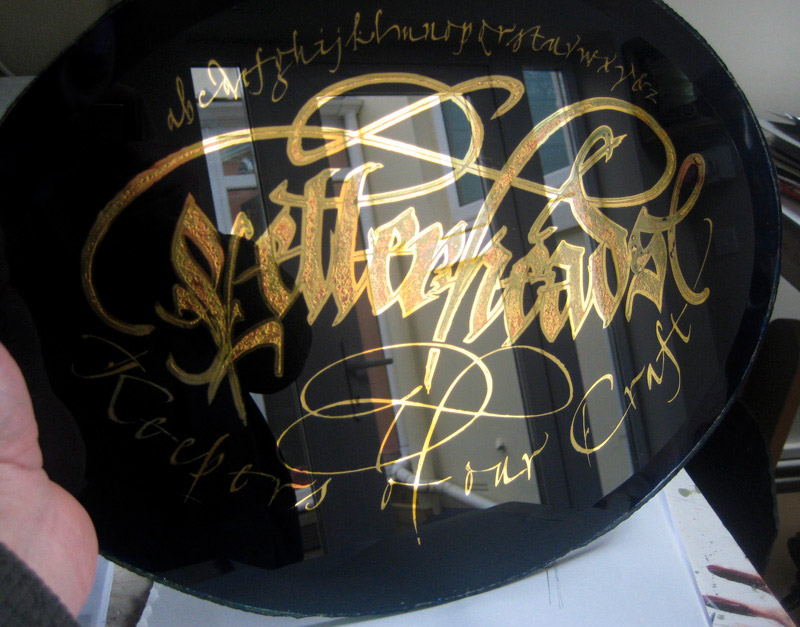 The glass signs in this section were projects for Letterhead gatherings that I have attended here in the UK. In 1995 I was lucky enough to be able to attend the Letterheads 20 Big Ones meet in Denver, Colorado USA, hosted by Mark and Rose Oatis. This gave me the chance to meet Noel Weber, a top glass artist and signmaker from Boise, Idaho.

Noel and his family became good friends of mine and along with many talented signwriters in the states, he really helped me see what was possible in this art form and so at the meet in Denver, I enrolled in Noel's glass workshop for 4 days of gilding and painting.

Please read this short story about how the Letterhead movement started.

Roughly 25 years ago, a magical moment in sign history, a group of extremely talented Denver craftsmen found each other and began having loosely structured meetings-get togethers more like it. They may have gathered just to have a good time and swap stories but eventually began intensive information and technique swapping. The old sign painting books such as Strong's Book of Designs became a cornerstone of their learning. As their talents and craftsmanship sharpened, they began entering the Signs of the Times annual design competition and generally swept every category. At the bottom of every entry, they wrote "member Letterheads". After the Letterheads were featured in a later Signs of the Times magazine, the rest of the sign industry learned of the Letterheads, with much envy.

In 1982, Noel Weber hosted the "Boise Bar-B-Q" in which he invited additional craftspeople from around the country. In October of the same year, Mike Jackson hosted the "Oklahoma Bash" in Moore, Oklahoma and roughly 135 sign makers showed up for an intensive weekend. Both Signs of the Times and SignCraft magazines sent their editors. As the next issues hit the streets, their articles and photos enlightened the entire industry. The movement was in full force with large meetings in Kansas City in 1983 and Memphis the following year. The rest of the growth is history. Literally hundreds of meetings have just "happened". The Denver group hosted the 10Th and most recently 20th anniversary meetings. While there is usually one National meeting a year, there are often four or five regional or area meetings a month scattered all over the country.

Amazingly, the Letterheads thrive, grow, and evolve without a true governing body. That's right-no president, treasurer, or even board of directors. The basic rule of thumb has been "if you want or have a Letterheads meeting-have one". That person or group decides the format, location, fees charged if any and all other variables.

At the center of the all the hoopla is the willingness to learn, share, and explore. Prior to the Letterheads, many craftsmen closely guarded their hard earned knowledge. Once, caught up in the movement, it becomes difficult not to want to share your knowledge, especially when even more experienced people are sharing theirs. While the earliest meetings in Denver emphasized the noble craft of sign painting, gilding, and designing, later meetings have acknowledged and accepted the introduction of the computer age. Even today, the blending of the old craft and state of the art technologies collect a crowd. Often, meetings have a theme, and attendees are encouraged to make a project showing off some of the person's talents or techniques.

If you ever attend a meeting, be prepared. Sleep a lot before you go because you won't want to when you get there. Some meetings have had all night episodes. Take your camera and plenty of film, flash, polarizing filter, and maybe some more film. Bring a portfolio and a notebook. Walking in the door, be prepared to feel intimidated-but that will soon pass as you get caught in the excitement. Ask the host if you can help out and they will certainly let you! Your first Letterheads meeting will probably change your life.