Dave Smith is a name that has become synonymous in sign-writing circles with high quality, hand crafted reverse glass signs and decorative mirrors. It is fair to say that now-a-days this is the main thrust of his work. There is, however, more to his story.

His career in sign-writing began in 1984, when he left Westlands School in Torquay, aged 16 and was apprenticed for 5 years with Gordon Farr & two associates. These gentleman were traditional sign-writers, who had come up through the ranks and Gordon, in particular had an almost uncanny ability to paint letters, accurately laid out, without even a preliminary sketch. Under their tutelage, Dave became an accomplished draftsman, accurate letter painter & talented pictorialist.

In 1992, Dave set up his own sign business in Torquay dealing every aspect of the sign trade from vehicle graphics to 3D installations but always with his own stamp of unique design and pristine execution.

In the same year, on a visit to New Zealand, he had the immense good fortune to be invited to Wilmington, California to meet Rick Glawson & his crew of the famous “Fine Gold Sign Company”. Rick, who is sadly no longer with us, was universally regarded by his peers as the godfather of gilding, with a reputation for sharing his encyclopedic knowledge of glass decoration with eager students of the craft. The two became firm friends & Dave thereafter attended the California conclave of Letterheads every year. This is a gathering of talented sign artists, carvers, muralists & gold leaf experts. They further fueled Dave’s passion for creating elaborate, ornate mirrors & reverse glass signs of distinction. At the peak of “his sign company” success, Dave sold the business, to concentrate more fully on gilding, painting & acid-etching glass, adding brilliant cutting, so that he could fully replicate the Victorian glass work he admires so much. From home in Torquay, Devon, UK, he continues his quest to uncover & share even more knowledge of the processes involved before it becomes a lost art.

Dave has never lost sight of the debt he owes to Gordon Farr, Rick Glawson & others too numerous to mention, for sharing their knowledge and passion with him. So, in return, he shares the fruits of his study with his many friends, old & new, in the sign trade, through courses, step by step instruction and one-to-one chats on the phone or internet.

He is supported, unwaveringly by his wife Mel and his daughters, Hannah, Lauren & Millie, who, tolerate his long work hours, frequent trips abroad and the steady stream of visitors through the family home, who come to marvel at the work & learn. For this, and for them, Dave is eternally grateful.

click the design to see the full size details.. 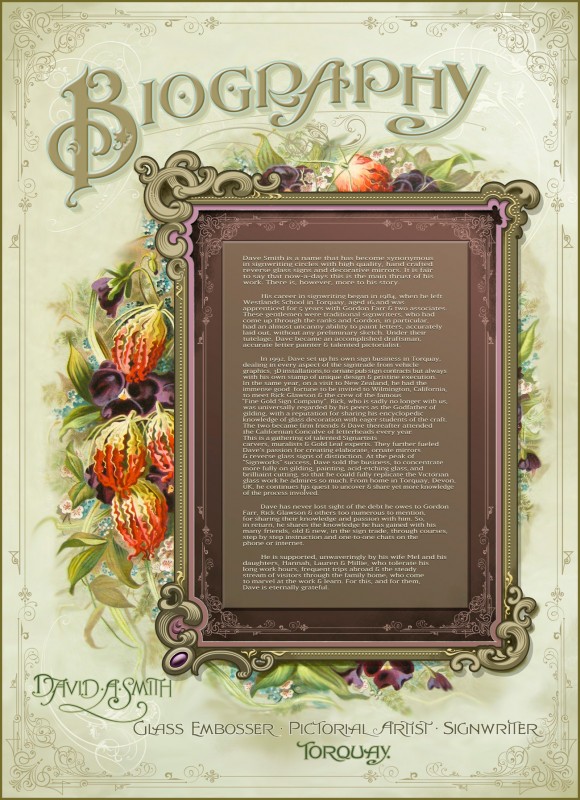